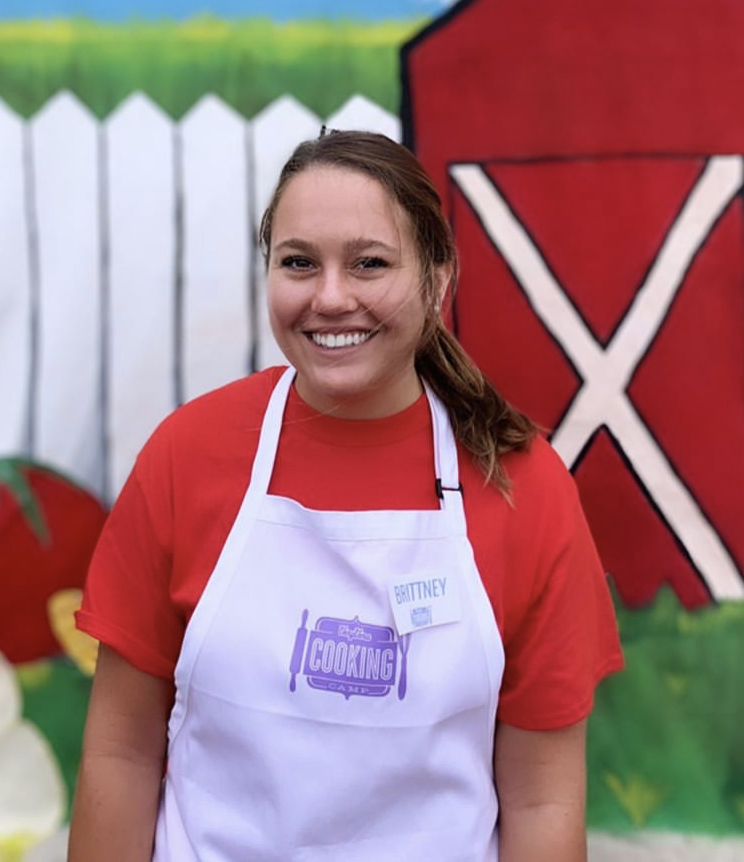 Lessons Learned at Camp are Timeless by Brittney Wainwright

Driving from Athens to Augusta, Georgia last Sunday I thought I had an idea of what I was in store for during my week at the VeryVera Cooking Camp. I had only met Vera once, but her passion, drive, and enthusiasm immediately captured my attention and I knew I had to squeeze in a week of camp in my already bustling summer to get a peek at what it was all about. I imagined fun and creative recipes, detailed and functional crafts, and an overall lesson of appreciation for the professional and life skills that are home economics. While all of these things I had imagined were true, there is a deeper magic to the camp that only can be understood by spending time in the walls of the VeryVera cottage.

During my week at camp I was placed in the kitchen, rotating 6 groups of campers through a recipe or two each day. Working through the theme of Camp Farm Fresh, I led the campers through preparing a diverse variety of recipes inspired by fresh foods and farm to table practices. The recipes the campers prepared were intended to inspire and educate them on the importance of fresh foods and the independence that comes from being able to prepare fresh food themselves. At the beginning of the week campers were taught important skills such as how to measure flour correctly, the purpose of adding baking powder to a recipe, the difference in liquid vs dry measuring cups, and much more important and daily culinary knowledge. By the end of the week, even the quietest and shiest children were eagerly raising their hands when I asked who wanted to show me how to measure flour and add it to the bowl. While the campers were excited to get their hands dirty cooking and enjoyed the recipes, they remembered the techniques and foundation of cooking and were proud and enthusiastic to show them off. The campers’ time in the kitchen not only instilled a new found interest in fresh foods and the preparation of local produce, but taught them essential culinary skills they were thrilled to show off and will carry with them through the rest of their culinary life.

The learning and growth that happens in the cottage at VeraVery Cooking camp would not be possible without the incredible staff that spends countless hours pouring their hearts and souls into the curriculum that is the foundation of camp. From the junior counselors to the leads, a common thread through the staff is that each member is returning for their numerous year working. Many counselors shared their story of how they transitioned from being a camper themselves to a junior counselor then even to a lead counselor. When I let people know that I was from Cleveland, Ohio and had never been to camp before, they were floored! What do you mean you have never come to camp before? As amazing and inspiring as it is to watch campers leave everyday showing off their skills and saying how much they have learned, the proof of how impactful and meaningful camp can be for young people is in the staff that is composed of campers who were so moved during their time at camp they keep returning for years to come. I was taken in by a group of intelligent and inspiring young adults, all who had started their time as a camper many years ago. Regardless of their individual passions or areas of study, they all shared a devotion and excitement for the art of home economics that was instilled in them during their time as a camper. Through the week, we shared laughs, challenges, smiles, and lessons that reminded me why I was a Family and Consumer Science student in the first place. By only spending a week at the VeryVera Cooking Camp for the very first time in my life, I was surrounded by a group of talented and passionate young adults that made me feel as if I had spent my own childhood attending camp and had my own deep roots celebrating home economics in the cottage. If I, a senior in college studying Culinary Science and Nutrition, was moved and encouraged by a week at camp with the very best, I can only imagine the life long memories and feelings campers themselves take with them long after camp is over.